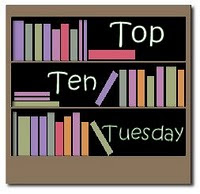 Greetings all and welcome to another Tuesday with a great top ten topic from The Broke and the Bookish. A couple weeks ago we did "Books We'd Love to Reread," this week, a similar but really totally different topic - books we'd love to read again for the first time. I find that the books I want to reread are books I want to wrap up in and get comfortable, but the books that I'd most like to read again for the first time are ones that really made me feel something really strongly that I'm convinced probably can't be re-created quite the same way on a second reading.

1. After You'd Gone by Maggie O'Farrell - I loved this book so much the first time I read it. I finished it on Christmas Eve a few years ago, and it made me ugly cry like no other book I've ever read. (I should mention that I do like that quality in a book.) It's so tragic...and hopeful, and the way the story's told just makes it punch you in the gut.

2. The Lord of the Rings by J.R.R. Tolkien - Especially The Return of the King. I can't even talk about it without getting all spoilery, buth ah, so good. I wanna feel that way again.

3. How I Live Now by Meg Rosoff - This seems to be one of those books that you either love or hate. There are cousins in love (which is shockingly not gross), no quotation marks, and an inexplicable occupation by some enemy. The narrator, Daisy, is so real and so cynical and sarcastic from the start, and she undergoes this huge transformation in this really unusual situation, and it's all incredibly profound and emotionally wrenching. And wonderful. Yeah.

4. City of Tranquil Light by Bo Caldwell - This is a novel I read last year about Christian missionaries in China. I wish more people would read this (especially Christians), because it's so good, and the way it shows its characters (based on the author's grandparents) having their beliefs put to the test again and again and passing with flying colors is so refreshing and tearjerking.

5. The Devil's Arithmetic by Jane Yolen - This is the first book I ever read about the Holocaust. It's basically a time-travelly book-long reason to remember some of the darkest days in history. It sparked a fascination in me for all books Holocaust just because of how real it made it all for me.

7. The Well and the Mine by Gin Phillips - I loved the family in this book. I'd love to meet them all over again!

8. Fat Kid Rules the World by K.L. Going - I swallowed this book in one gulp. It's all about a fat kid who thinks he's totally worthless and a kinda homeless guitar prodigy with a band that needs a drummer. I'd love to read this again and slower and just enjoy that moment when these two characters realize how badly they need each other. It's perfect.

9. Last Days of Summer by Steve Kluger - This is one of those books that I feel like could never be as good as the first time. Once you know what happens at the end (even though you suspect it as the book progresses anyway), there's no going back, it just can't be as good as it was the first time. It's about an annoying but lovable kid who irritates a major league baseball player into becoming his friend. Told mostly in letters it is hilarious, heartwarming, and heartbreaking. Just talking about it makes me want to read it again.

10. The Truth About Forever by Sarah Dessen - I read this book at just the right time. So much of Macy's story hit home for me that I found myself in tears again and again because I liked her so much and because I really felt like I could relate.


What books would you like read again for the first time?


P.S. On a side note - it's my blogiversary, and I'm giving away a few books. Check it out?
Tweet