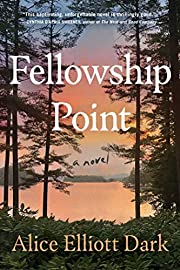 Author Agnes Lee has made a name for herself with a series of children’s books about character, Nan, a self-assured little girl who gets into all kinds of adventures, but her passion is more for the "fly on the wall" series of novels she writes under a pen name about her fellow moneyed Philadelphians.  Her friend Polly Wister has made a life for herself as a mother and as a wife, dedicated to brightening the lives of those around her, soothing her husband’s fragile ego and striving never to rock the boat.  Both born to generational wealth in an era when a woman’s best hope and expectation was to make a matrimonial match, the two take sharply divergent paths in their lives, but those paths always lead to summers on Fellowship Point in Maine.  Agnes, having recently received a cancer diagnosis, is determined to find a way to preserve the wildlife sanctuary that exists on the families’ lands there and to finish one final novel before the end of her days.  Unfortunately, money-grubbing cousin Archie and Polly’s husband, Dick, who is rapidly descending into dementia, stand in her way.

Fellowship Point is a long, contemplative book that touches on many themes – feminism, friendship, philosophy, aging, love, and land ownership.  More than that, however, it’s a touching character study that illuminates the beauty of a friendship between two women who often couldn’t be more different from each other growing old side by side.  I couldn’t put down this tale of forthright, opinionated spinster Agnes with her hidden heart of gold and equilibrium-seeking Polly whose deference and willingness to put her family’s needs ahead of her own belies an inner backbone and intelligence that often is a surprise even to her.

In Dark’s hands, Agnes and Polly’s beloved Maine comes vividly to life, and provides a setting rife with both fond and dark memories for the pair of octogenarians to reflect upon.  I loved this story and the unique perspective of these women who are not ready to be pushed aside, even though society and their families both are hard at work trying to minimize them as they age.  The slow unveiling of Agnes’s secrets keeps the pages turning, but arguably the best thing about Fellowship Point is the thoughtful depiction of a lifelong friendship between women who know each other often better than they know themselves.

An Honest Lie by Tarryn Fisher

Artist Rainy Ives moves from New York City to the Pacific Northwest both to be with her new partner Grant, but also to escape the last tendrils of her dark past.  On isolated Tiger Mountain, Rainy struggles to fit in with Grant's friends, a slightly catty group that doesn't easily welcome outsiders.  Nonetheless, Rainy manages to cling to the edges of the group.  Feeling like she doesn't fit in, she is more than a little surprised when they invite her on a Las Vegas girls' weekend.  With some pressure both from the women and from Grant, Rainy finally agrees to go, but, for Rainy, a trip to Las Vegas is more than just an awkward social event, it's a return to the very doorstep of the place that houses her worst memories.  When her friend Braithe disappears in Vegas, the only way to save her is for Rainy to slip back into the life that she was so desperate to leave behind.

Fisher has penned a page-turning thriller that unfolds in two timelines weaving Rainy's childhood memories with the friends' weekend of light Las Vegas debauchery until the two finally intersect with Braithe's disappearance.  Braithe's bizarre behavior leading up to her vanishing adds still another dimension to the mystery.  Rainy is a sympathetic character and An Honest Lie is a fast-paced and satisfying story of her finding her strength and the redemption of facing down her childhood demons one last time.

(Disclaimer: Review copy received from the publisher in return for review consideration.)

I wrapped 2021 up on a decidedly mediocre note, consigning one book to my DNF pile for being too unbelievable and following it up with three only slightly less unbelievable stories.

2 a.m. at the Cat's Pajamas, is the story of 9-year-old Madeline Altimari, her teacher Sarina, and, Francis Lorca, owner of a failing jazz club.  Madeline is a prickly, old-for-her-age kid who is mourning her recently passed mother and dreams only of singing jazz.  Sarina is trying to rekindle something with an old flame, and Lorca is just trying to save his club from police scrutiny when the three come together in an unlikely moment on Christmas Eve Eve.  This is kind of a bizarre story of found family, but Bertino's writing is an attractive mix of magical realism and poetic prose.  While her characters may not have quite come to life for me, the Philadelphia setting really did.  Ultimately, Cat's Pajamas serves as a heartfelt love note to a city that doesn't often find itself so well-captured in print.

In Let It Snow, YA heavyweight authors John Green, Maureen Johnson, and Lauren Myracle come together with a trio of linked novellas.  The first features Jubilee "not a stripper, despite the name" Dougal, whose parents end up in jail on Christmas Eve.  Bound for her grandparents' house in Florida during a massive snowstorm, her train gets stranded, which ends in a bizarre Waffle House encounter and ultimately being way too trusting of strangers.  Meanwhile, friends Tobin, J.P. and The Duke (AKA Angie) mount a snowy expedition to the very same Waffle House, now populated by their friend Don-Keun and a gaggle of stranded cheerleaders, but the cheerleaders are not the stars of this story.  Finally, we have uber self-centered Addie whose infidelity (and also super self-centeredness!) has her heartbrokenly mourning the loss of her boyfriend, Jeb.  But maybe's he's not lost forever, maybe he's just stranded at (wait for it...) the Waffle House!

This trio of romances starts off promising with Johnson's offering which is quirkily amusing.  Green's effort is a bit of a skid with the "race to the Waffle House with Twister" plot line which reads a little like the bad fan fiction your cousin once wrote in high school but for the romance that does end up sweetening the story a bit.  Myracle's contribution is just perplexing.  Addie is a pretty whiny, unlovable character who undergoes a transformation, but one that makes no sense at all.  Turns out you have to want a happy ending for a character for the happy ending to be satisfying.  I probably should have given this one a pass.

Last but not least, Clock Dance by Anne Tyler is the story of Willa McIntyre who abandons her life in Arizona with her second husband, Peter, to care for the child of her son's ex when said ex is recovering from a gunshot wound.  Tyler's writing is well-done and her plot well-executed.  I really enjoyed the setup of the book as we get to know the forces that have shaped Willa into the accommodating, "needs to be needed" adult that she became.  She brings a working-class Baltimore neighborhood to life, including opinionated Denise (the ex/GSW victim) and her practical daughter, Cheryl, quite well.  Tyler tells a good story about a woman on the edge of a transformation, but I had trouble getting past the very incident that brought them all together in the first place.  Flying cross-country to care for a grandchild in an emergency is one thing, abandoning your life and flying cross-country to babysit the daughter of a stranger is a little too much of a reach for my suspension of disbelief.