Sorry I haven't been around much this month, but it's been a roller coaster of one that hasn't left me much time to so much as turn on my computer, much less blog constructively, but I'll save that tale for another day.  Until then, witness my big Christmas gift...finally asked for and received for better or worse.  I've held out for a long time, but here it is at last...the dread Kindle (a Paperwhite - purely for reading, no additional distractions for the short attention-spanned).  Bad picture quality brought to you by iPhone and my glare-y kitchen table. 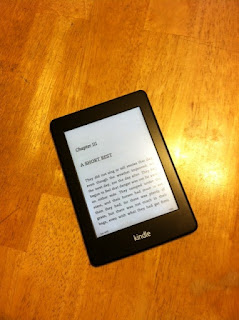 Aw, but it is kind of cute, now, isn't it?  And it might have proved itself by making it exceedingly easy for me to purchase and re-read a good chunk of The Hobbit immediately in the wake of seeing the movie yesterday.  I could get used to this, I think.  My TBR "pile"?  Maybe not so much.

Anyhow, just thought I'd stop in between holiday meals and gatherings to wish you all a very Merry and assure you all that I have survived most of December despite reports to the contrary.

So, what did Santa leave under your tree?
Tweet

Jayne Amelia Larson's memoir starts out the way anybody's story of trying to pursue their dream might start.  Girl moves to LA to try to make it in the film industry.  Girl gathers mountains of debt while failing to gather mountains of job offers.  Girl takes utter crap job to pay the bills.  It's a common story, but the utter crap job that Larson takes is a boon to her readers because she's not waiting tables or cleaning toilets, rather she's chauffeuring a pack of rich Saudi royals.

As it turns out, a truly awful job for Larson makes for an engaging memoir that proves to be both entertaining and enlightening.  Life among the Middle East's most filthy rich is bizarre to say the least.  The Princess heading up the party spends most of her days shopping in high end stores with family, friends, and servants and demands that the chauffeur for each participant follow along as the party walks between stores.  A tea set gets its own expensive hotel room.  Women who, at home, are expected to be covered from head to toe to go out in public, who may not even be looked upon by a man not related to them, suddenly throw off their restrictions, not to mention most of their clothes once they hit American soil.  Larson is responsible for catering to her employers' every demand, no matter how ludicrous, and standing at the end of a long road, is that beacon of freedom - the unfathomably large tip the Saudis are rumored to pay for a job well done - a tip Larson is counting on and slaving toward in hopes of keeping her creditors at bay.

Driving the Saudis is a fascinating book, really.  On one hand it is a memoir of a woman pushed to the brink by an unbelievably demanding job, but also a woman who found unexpected friends in the servants to the royal family.  On the other hand, the book proves to be an enlightening look at a culture that can rarely be seen from the inside. Larson's book is compact and well-paced, moving from one anecdote of her time with the Saudis to another fluidly in such a way that never loses the reader's interest.  Larson's tales of the Saudis are wild, mind-boggling, and occasionally funny, but Larson never seems to lose sight of the fact that these are people she is writing about and shines a light on the paradoxical lives of the Saudi women who have more money at their disposal than most of us can even imagine in a lifetime but whose lives are fiercely constrained by a society ruled by strict Muslim law.

I fully expected Driving the Saudis to be an entertaining read, but I was surprised again and again by Larson's unique insights into the lives of both the rich Saudi royals and their servants, who are little more than girls working to send money home to their families.  Driving the Saudis is an amusing romp among the rich, but it's also a fascinating snapshot of a culture that could hardly be more foreign to us.

(Thanks to Free Press for sending me a copy in exchange for my honest review.)
Tweet
Posted by Megan @ 7:51 AM 5 comments: