Book reviews - I still write them!  No seriously, look, here's one now!

The House at the End of Hope Street is a novel about a magical house that shelters women in need for a set number of days.  Even better, the women who have benefited from the house’s healing in the past, many of which became famous for their accomplishments, linger in portraits that litter the walls doling out encouragement to the current denizens.  Benevolent spirits of house guardians past provide the women with whatever they need to nourish their souls and pick themselves up for a new start during their hundred day stays.

During the time of the book, the three women in need are Greer, a failed actress looking for a new path; Carmen,  a talented singer fleeing from an abusive husband; and Alba, a humiliated ex-scholar from a dysfunctional family of scholars whose secrets threaten to overwhelm her.  Each finds refuge in the house with Peggy, the aged house guardian, getting guidance from the photos on the wall, and in Alba’s case, the spirit who lives in the kitchen.

I think I’m in the minority when I say that I really didn’t like this book as much as I expected to like it.  Several bloggers I love and respect very much enjoyed this one.  For my part, I was entranced by the house and its guardian, but the three women in need of the house’s aid failed to captivate me.  By and large, I don’t mind when  a narrative switches focus among a few characters, in this case, however, I think the tactic does a disservice to the characters.  The pace of The House at the End of Hope Street felt off to me.  Van Praag bounces too quickly between characters not giving readers quite enough time to settle in with one and feel sympathy for her before veering off to the next.  Despite the fact that van Praag spends a good amount of time developing each of her characters, the brevity of the time we spend with each seems to undercut that and create a story that feels somehow shallower than what I'd hoped for.

There are some truly heartwarming moments lurking inside The House as van Praag’s characters negotiate their respective paths to self-discovery.  The House as a character unto itself is ripe with fun discoveries.  In the end, though, the awkward pacing held me at a distance and kept me from falling head over heels for this one.

(Disclaimer:  I received a copy of this book from the publicist in exchange for my honest review.  Impressively, I've managed to review it before the paperback release date of March 25th.  Rather less fortunately, they were probably hoping I'd get this in in time for the, um, hardcover release.)

Anyhow, we interrupt this moment of book blogger guilt to post the picture of the paperback cover which I might possibly prefer to the hardback cover (which is also quite nice).  Which do you think? 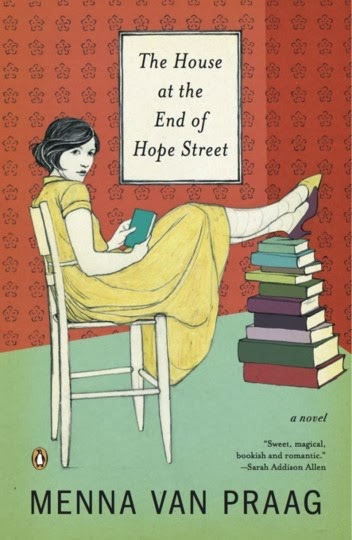