A to Z Bookish Survey 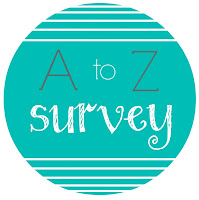 Jamie over at The Perpetual Page-Turner cooked up this fantastic survey which I spotted the other day, or a few weeks ago, or whenever.  It looked like a fun way to mix things up around here in between sporadic book reviews, so voila!

Author you’ve read the most books from:

Almost certainly Stephen King.  I looooved Stephen King in high school, and I spent a lot of lazy summer days devouring his books.  Last summer I finally read The Stand, and the SK love continues!

Hmm, I don't know.  I'm good at starting series, bad at continuing them.

Drink of Choice While Reading:

I've pretty much changed over to drinking mostly water whether I'm reading or not, so probably water!

Physical book forever.  I've recently grown to appreciate my e-reader and it's cousin the Kindle app, but nothing can replace the feeling of turning pages. Plus, what would I do if I couldn't go on used book buying sprees?

Fictional Character You Probably Would Have Actually Dated In High School:

Wes from The Truth About Forever.

Glad You Gave This Book A Chance:

Angelfall by Susan Ee.  I saw this one for sale in the Kindle Daily Deal, and I had some reservations, but I read the sample and took a chance.  And I loved it.  And I can't wait for the sequel!

There's a bunch, but how about one from this year?  The Grave of God's Daughter by Brett Ellen Block.  My parents bought this for me many moons ago at a used book sale thinking I might like it.  I tried my Random.org trick earlier this year and it plucked this one from the obscurity of my shelves, and jeez am I glad because it's so good and nobody seems to know about it!

Important Moment in your Reading Life:

Just before I started my blog, I was chosen to take part in Elle Readers' Prize several times, back when it was still in the magazine and not just web content.  They'd send you 3 books, you'd read them and write short reviews of them and they'd choose a few of those reviews to appear in the magazine, so my reviewlettes have appeared several times in the pages of Elle magazine.  It was the first time it dawned on me that writing about the books I was reading might be fun and maybe even prove valuable to someone other than me.  So, then I started a book blog and the rest is history.

Here Comes Mrs. Kugelman by Minka Pradelski.  It's got the weirdest narrator and a different sort of story within a story structure, but I ended up liking it a lot.

Kinds of Books You Won’t Read:

Erotica, (and on the totally other side of the spectrum) cheesy inspirational fiction, and books where I can't begin to guess at the pronounciation of the names of the major characters

Not sure, but The Stand by Stephen King is by far the longest book I've read recently, clocking in at 1100 or so pages.

Major book hangover because of:

How I Live Now by Meg Rosoff

Number of Bookcases You Own:

One Book You Have Read Multiple Times:

I know this is two, but Bridge to Terabithia by Katherine Patterson and The Devil's Arithmetic by Jane Yolen may be the only books I've *ever* re-read willingly.  And that deserves a mention, right?  Plus, I think one day I would even re-read them again!

The front porch when it's nice out.  My bed when it's not.  A cafeteria table at work in a pinch. :)

Quote that inspires you/gives you all the feels from a book you’ve read:

"Today I am bothered by the story of King Canute. (...) The story is, of course, that he was so arrogant and despotic a leader that he believed he could control everything - even the tide. We see him on the beach, surrounded by subjects, sceptre in hand, ordering back the heedless waves; a laughing stock, in short. But what if we've got it all wrong? What if, in fact, he was so good and great a king that his people began to elevate him to the status of a god, and began to believe that he was capable of anything? In order to prove to them that he was a mere mortal, he took them down to the beach and ordered back the waves, which of course kept on rolling up the beach. How awful it would be if we had got it so wrong, if we had misunderstood his actions for so long." - From After You'd Gone by Maggie O'Farrell

I regret that I don't read more and faster!

Series You Started And Need To Finish(all books are out in series):

The Chemical Garden Trilogy by Lauren DeStefano.  I loved Wither, but I suck at keeping up with series likes I should!

Three of your All-Time Favorite Books:

The Return of the King by J.R.R. Tolkien, After You'd Gone by Maggie O'Farrell, and The Power and the Glory by Graham Greene.  And three is so so so not enough.  I'm already rethinking these choices.  :-P

The Many Deaths of the Firefly Brothers by Thomas Mullen.  Also City of Tranquil Light by Bo Caldwell.

Very Excited For This Release More Than All The Others:

Cannot answer, too hard.  So many great authors coming out with new stuff this year that I can hardly conceive of an answer to this question!

Continuing to acquire them even though I'll probably be dead before I can read all the books I already have!

X Marks The Spot: Start at the top left of your shelf and pick the 27th book:

That would be The Almost Moon by Alice Sebold.

What's Left of Me by Kat Zhang the e-book is on sale for $ 2.99 at the moment and what with how lots of bloggers are crazy for it, I couldn't very well not buy it, now could I?

ZZZ-snatcher book (last book that kept you up WAY late):

The Fault in Our Stars by John Greene.  I surely couldn't finish it at work, you know?  I mean, all the weeping would probably be a little awkward.


Have you done Jamie's survey?  If you have or if you do now, I'd love to see your answers so leave your link in the comments!
Tweet
Posted by Megan @ 2:17 PM 5 comments:

Greetings one and all, and apologies again for my unpredictable disappearances.  This time around I was attempting to get a new job.  Alas, all I got for my efforts was a week of stressful interviewing, a near miss, a mega-dose of bitterness, and a growing conviction that working for my current organization is an untenable situation.  Well, I guess everybody needs a wake-up call to get off their butts once in a while.  I hope it's not too "pie in the sky" of me to imagine that there might be a job out there for me that is either really enjoyable (if low paying) or, you know, at least have a career path that doesn't immediately dead-end upon hire.  And yes, I'll probably delete this once I put my next application in, but first I need to re-learn all my lost and wandering Excel skills, so it can stay a while.  *sigh*

Anyhow, enough grumping, it's time for the ever elusive book review!

So, Stargazey Point by Shelley Noble.  You might perhaps remember my gushing over the pretty cover.

See....pretty, right?  Anyhow, my brain was apparently washed by all the pretty because I requested this off of Wm Morrow Paperbacks blogger outreach list without any sort of contemplation about whether I would, you know, enjoy things about the book that aren't the cover.  After reading the prologue which was so cheesy I may have actually rolled my eyes, I had a few doubts.  However, I figured since I am a jerk who apparently chooses her review books based on cover alone and have no one to blame but myself, I supposed I'd better at least give it the fifty pages I owed it.  As I suspected, it didn't magically transform into a breathtaking work of literature, but happily, it did turn into a sweet beach read (for the non-beach goer) with lovable characters and a sweet (if predictable) plot.

Documentary filmmaker Abbie Sinclair is deeply damaged after her latest project ended in tragedy.  Luckily for her, her best friend stateside has a few elderly relatives who are happy to host Abbie in their crumbling seaside mansion while she figures out what comes next.  Cabot Reynolds the Third is a man who gave up a promising career as an architect to return to the down and out South Carolina beach town of Stargazey Point to restore his uncle's carousel and, hopefully, breathe new life into the town before its natives are forced to sell out to developers.  The elderly Crispin siblings are Stargazey Point's old money, but their funds are quickly disappearing.  The three have fallen to selling off their belongings to pay off their taxes.  Despite their troubles Abbie finds a home with Millie, Marnie, and Beau, and before long she finds that she doesn't have to jet around the world to keep up with the deeds of her over-achieving, do-gooder family members, there's plenty of good to be done right in Stargazey Point.

What to say about Stargazey Point?  It's a stereotype in the best possible way.  It's a town that has been plunged into hard times by a few too many storms, where taxes are still sky-rocketing forcing natives out in favor of soulless, big-money resorts.  It's peopled by a pack of well-intentioned, incredibly meddlesome southern ladies who are at the ready when it comes to pushing this damaged stranger to rediscover her purpose.  All it takes is a little boost from a guy who favors his small-town roots to his big-city career and a woman who seems to know how to draw out the best in people even when she can only see the worst in herself, to give the struggling natives of Stargazey Point the incentive they need to embrace their town's heritage and make it new again.

The plot is a little too contrived, most of the characters are a little too saccharine, the "deep, dark" secrets are little too close to the surface, and the cynics are a bit too easily won over, but Abbie's story is addictive nonetheless.  There's always something compelling about a person finding healing, redemption, and love after tragedy, even more so when she's entwined in a town filled with exaggeratedly loveable characters finding its feet again.  The town of Stargazey Point jumps off the page, and Abbie's story is just the sort of easy-reading, satisfying tale that reads best on a lazy summer day.

(Thanks to William Morrow Paperbacks for providing me a with a copy in exchange for my honest review.)