It's too late on Sunday afternoon/evening for comfort, and I am coming to you more or less live from the wreckage of my overcluttered desk.

Listening\  To Train's new album, Bulletproof Picasso.  I became a colossal Train fan, like, two albums ago, and I continue to be.  The last track, Don't Grow Up So Fast, may or may not have made me cry.

Making\  Plans.  (Ha! No I haven't taken up knitting or cross-stitching or anything, and the world breathes a sigh of relief.)  I've been contemplating seeing Straight No Chaser on tour for a few years now.  Their a cappella awesomeness makes me smile.  They'll be in Hershey this year.  Maybe I will be, too?  I just need to find a some poor sucker to take with me.  In the meantime, I'll be serving as my dad's "poor sucker to take with me" as we make the journey to Pittsburgh to see the first NFL game I'll ever see in person, and his, too.  He's been an Indianapolis Colts fan for as long as I can remember and probably a lot longer than that.  So, we'll be a couple of Colts fans in hostile territory, but I'm looking forward to it anyway.

Hating\  Fall.  I know, I hate myself for hating fall, but I do.  You see crisp, colorful leaves.  You feel refreshing cooler temperatures.  Pumpkin spice lattes, bonfires, high school football games, hot cups of tea, reading books while wrapped in fuzzy blankets.  That stuff is all nice, don't get me wrong.  Unfortunately, I have to build a fort of distraction around myself to stop from fixating on the coming 6 months of undiagnosed Seasonal Affective Disorder, not to mention cold and flu season which has already started at my house.  *sniffles*  All this potential misery amplified by my rapidly forthcoming shift change which will call for me to rearrange my life schedule right before the dreadful winter months set in. 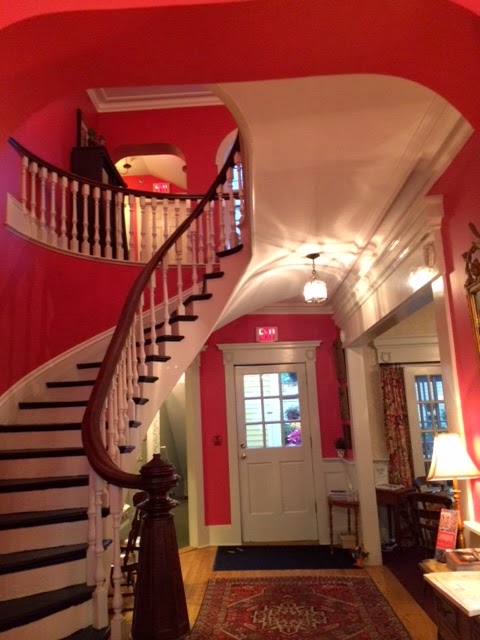 Returning from\  The first of two October trips to Boston (see above re: Fort of Distraction).  My college BFF and I took Boston last weekend.  We stayed in a beautiful inn in Cambridge that served a full breakfast and afternoon tea everyday, wherein we were decidedly *not* the target demographic, which, okay, was awesome.  We stayed in a room with two twin beds like a 50s sitcom married couple and dined every morning in the presence of older couples from foreign countries with grown or semi-grown children living in the area.  We also rode the cool Greenway carousel and spent a rainy day observing penguins, seals, and sea turtles at the New England Aquarium to skew our age group back the other way.  We also, of course, ate lots of delicious food including the ubiquitous Mike's cannoli, went book shopping at Porter Square Books, paid a quick visit to my old neighborhood to enjoy some Indian food, and enjoyed the best entertainment the basement of a CVS has to offer at the Improv Asylum (hilarious!). 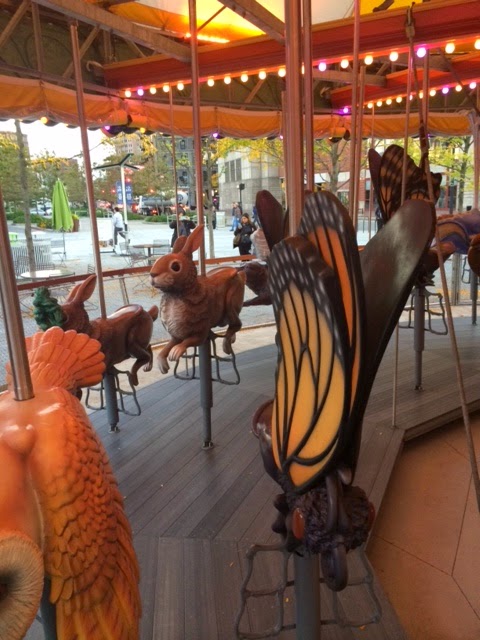 Going to\  New York City for the day on a bus next Saturday.  It'll be my cousin's first time in said city, and I'm looking forward to showing him the sights, one of which will surely have to include The Strand, right?  I mean, you can only tolerate the top of the Empire State Building and Times Square for so long before you need to be soothed by vast amounts of books, am I right?

Missing\  Dewey's 24 Hour Readathon.  So sad to have booked something over it, but alas, I seem to be on tour this month.  I guess I'll have to read on the bus in honor of Dewey and all the dedicated participants. ;-)

Reading\  I just finished Allegiant thus wrapping up the Divergent series.  Roth definitely made an interesting choice about how to end her series.  I guess I didn't hate it with the vitriol that some people have, but, on the whole, I think the first book was the best and the series very slowly declined from there.  Nonetheless, I was kind of in a reading funk, so I'm satisfied to have simply finished a book that was moderately absorbing.  Now I'm on to The Killer Next Door by Alex Marwood whose Wicked Girls I enjoyed earlier this year.  Lately, books written for grown-ups haven't really been working out for me, but I'm pretty sure The Killer will be the one to break that trend.

Watching\  I finally saw The Fault in Our Stars movie.  It was good, but not as good as I wanted it to be.  Oddly, in text Green's main characters' precocious pretentiousness was the stuff dreams are made of, on screen, I'm afraid it all just irritated me the slightest bit.  Still good, still cried, but I don't know, something just wasn't quite right.  I also saw the movie version of This is Where I Leave You.  I haven't read the book because I'm seriously sucking at getting to the book before the movie lately, but the movie was great.  It was one of those that gets you laughing and crying at the same time (which is different from crying with laughter, if you must know), very well cast, and most satisfying.

Blogging\  Wait...what's this blogging you speak of?  I haven't been, and I'm pretty sure I missed another blogiversary in there, too.  That means Leafing Through Life just (very unceromoniously) turned....7? Yeah, 7, I think.  I know this month has been kind of a bust because I've kind of been "on tour," but other than that I was happy to see my desire to blog come back for a lot of this year.  It's been fun being a part of things again, and I've pretty well sunk into the groove of blogging when I want, and not blogging when I don't feel like it, in a way that has been largely guilt free.  This, I'm pretty sure, is the mark of the mature B-list (okay, C-list) blogger. Expect more of this guilt-free slacker blogging to continue while I spend several more weekends away from my desk enjoying the last few weeks of passable weather before the SAD kicks in.

So, what have you been up to while I've been distracted?  Reading great books?  Having exciting adventures?  Blogging bookish content that isn't linked up to Top Ten Tuesday?  Tell me!