July was the month of weird reads.  Honestly, I was moving and terribly busy and stressed both at home and at work and the usual things that have no problem holding my attention were well beyond my mental capacity for most of July.  Happily, a couple of books rose to the challenge of keeping my over-stressed mind from melting all over the floor while still serving as a good distraction from the madness.  One was Enthralled, a book of YA paranormal short stories that I picked up at my first BEA (which was ever so long ago now).  It's sat patiently on my shelves waiting for one of those moments when I decide I'm into short stories again.  Short stories, especially of the YA variety, were just the ticket for this crazy summer.

Enthralled features a wide variety of paranormal situations from a bunch of pretty big name YA authors.  Obviously, some stories were more to my taste and others less, but overall I found Enthralled to be an enjoyable collection.  Some of the authors' pieces were supplemental to their other published works and offered up a good enticement to dig into the authors' novels.  Melissa Marr's piece about the fairy Winter Queen taking a vacation with her (now mortal) beloved promises to lure me back to finish her Wicked Lovely series, for one.  Jeri Smith-Ready's selection drew on her characters from the Shade series and convinced me that I should give that series another shot since the short story, "Bridge," was among my favorites.  Another of my favorites was Carrie Ryan's "Scenic Route" which is set in the same post-apocalyptic world as her Forest of Hands and Teeth series, a world that I'm now ready to dig into sooner rather than later.

Other stories stood alone, and I was sad to see them end and disappointed to find there wasn't more fiction out there with the same worlds and subjects that I could dash out and buy.  Ally Condie's selection, "Leaving" was one.  In just a few short pages she managed to create a captivating dystopian world and a couple of characters that made me hunger for more of their story.  "The Third Kind" by Jennifer Lynn Barnes was another great story about a pair of sisters unwittingly being swept into an otherworldly war that I'm certain would make a compelling novel.

A few of the stories left me cold, particularly the ones that were looking on the "lighter" side of paranormal but came off more ridiculous than funny. However, by and large, Enthralled was an excellent collection of diversions that proved to be the perfect opportunity for me to dip back into the waters of paranormal YA that I'd been missing without realizing it.

(Thanks to the publisher for giving away copies at that long ago BEA.)

Have you heard the one where I spent all of early summer getting ready to move to a new apartment and finally actually moving out of my parents' house?  Then the one where I spent most of mid-summer working like a dog at my job while the lab I work for got moved into its new quarters?  Then maybe the one where mid-August rolled around and I was thinking maybe I can breathe again, read more books, take up blogging again, go on vacation and enjoy myself a little before my favorite season slips away in the blink of an eye?  This weekend I thought there was totally a light at the end of my tunnel.  There was.  Unfortunately, it was a train.

On the very first night of the glorious long weekend I was about the take, I was rescuing a baby from a kidnapper ... I mean, I was rescuing a kitten from a tree... Okay, fine, I was badly underestimating how many stairs I had left to descend to arrive at the bottom of my new apartment's staircase while taking out the trash when I took a tumble and broke my stupid left ankle.  So, here I am with 6 or more wretched weeks stretching out before me of wearing a splint and hobbling around on crutches and generally being a massive invalid, and that's probably the best case scenario.  I feel stupid and in pain and kind of hopeless about the whole thing, and the stairs are no longer just a danger to the clumsy but practically an insurmountable obstacle between me and the wide world. 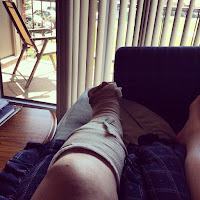 Happily, my family and friends have already begun to pitch in, bringing me food and medicine and otherwise assisting me in my time of infirmity.  So that's what I can see if I try to look on the bright side.  If I keep looking, I realize I have a million books here to read, and blogging is one of the few things I do that doesn't require much walking, so while vacation and, you know, actual happiness might be slightly beyond my reach, finally rejuvenating the blog (albeit a little morosely) and participating in next week's Bout of Books (how perfectly timed!) seem much more attainable.  So, here's my official letter of intent to participate...


So I'll be trying to do a little more reading next week instead of a little more binge watching TV series on Netflix while hosting my own pity party.  Wish me luck!

So, how's everyone's summer been while I've been slaving away at my life?  Have you ever broken a bone and lived to tell the tale?  ;-)
Tweet
Posted by Megan @ 4:20 PM 8 comments: