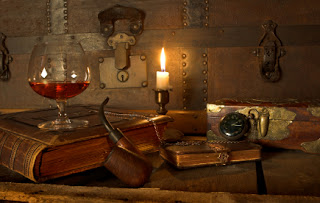 The rules are simple:

- Read a minimum of 8 books published in 2008. (Library books are acceptable!)
- No children’s/YA titles allowed, since we’re at the ‘pub.’
- At least 4 titles must be fiction.
- Crossovers with other challenges are allowed.
- Titles may be changed at any time.

Having contemplated joining since it was announced, this is the post where I finally break down and join the Pub '08 Challenge hosted by 3M. I was kind of holding out to see how many new titles I would end up needing to buy or borrow from the library before I made a committment, and having been awarded (much to my surprise) yet another book from the Early Reviewer program on Library Thing and with a few more to come from Elle, I'm convinced that I'll have enough throughout the course of the year to do the challenge without needlessly adding significantly to my TBR pile.

Now, we interrupt this post for a brief moment of narcissism. The March issue of Elle magazine finally arrived in my mailbox. Now if you'll recall (that is, if you were here in Nov/Dec last year), I got to jump on the bandwagon of its Readers' Jury program again, and they sent me 3 books to read and comment on for the March issue, all 3 of which I uh... didn't love. Nonetheless, I'm enjoying my 15 minutes (okay...15 seconds) of fame again this year because two of my little comments are in the magazine. Now, for a fashion magazine, I'm always rather impressed that they have a pretty decent book section (*flips through pages aimlessly* hmmm...this season's little black dresses, 5 easy tricks for eyebrow shaping, Hollywood's secrets to great hair, and...BOOKS!), so it's fun to be a tiny part of it. It's not like my reviews and ramblings aren't already wandering all over the internet being read by other humans, but gosh, it's kind of an extra-special thrill to see my name and what I wrote on the pages of the magazine (and I always manage to be shocked that they chose *my* comments to put in the mag!).

By the way, if you happen to be interested in trying it, you can e-mail eagerreader at elle dot com and well...ask nicely about joining up with the program, and there's always a chance they'll actually reply to you with more info and an application (as they did for me - but it did *take* a while). You get three ARCs to read and write mini-reviews of (which may or may not get published in the magazine) for the month of your jury and then the 5 other top books from the other months to read during the summer for their grand prize. The only downfall is that it's kind of a crapshoot as to what you're going to get. I've read some great books for it (a few of my favorites from last year that I probably still wouldn't even know about if it hadn't been for Elle), and some not great books for it (including a few of my anti-favorites from last year). All in all, it's a pretty neat experience.

That's all for now. I did, however, finish a great book last night, so hopefully I'll be back soon with its review!
Tweet